Affordable Housing has been the biggest driver for growth in the real estate sector and along with the implementation of Pradhan Mantri Awas Yojana (PMAY) has reduced urban India’s housing shortage by 60%, revealed a Magicbricks Report – Residential Real Estate: Urban Housing Deficit Down 60%.

The report ‘Urban Housing Deficit Down by 60% states that more than 9 lakh houses of upto Rs. 50 lakh each have been completed in just over three years and over 30 lakh have been approved. Over 60 lakh houses have been sanctioned under the PMAY (U) till 15th Oct 2018, out of which 33 lakh are under beneficiary-led construction (BLC). 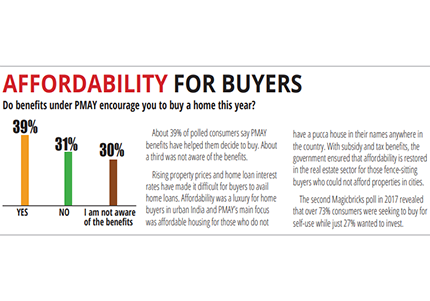 Around 58.25 lakh houses are in 30 sq m (EWS) category. The cost of a BLC house ranges from Rs 3.5-5 lakh. However, the cost may go upto Rs 7.5 lakh in hilly states and some UTs. By March 2019, the government intends to sanction at least 75 lakh houses in urban India. These numbers of houses under PMAY are significant in that they address the burgeoning urban housing shortfall in the EWS and LIG categories.

The report also said that almost 40% of home buyers feel that PMAY benefits have helped them arrive at the decision to buy a house. This was in line with the consumer search trend on Magicbricks platform that revealed that the volume of searches for actively traded property has almost doubled from June 2016 to September 2018. While 50% are return users, the remaining 50% are new buyers entering the market for the first time. About 80% currently look for completed projects while another 20% are willing to consider under construction projects.

Commenting on report, Ms. E. Jayashree Kurup, Head – Editorial & Advisory, said: “Thanks to Affordable Housing and PMAY, new end-users in the age group of 27-40 have actively

started looking for houses for self-use. They are opting for either completed stock or those that are guaranteed to complete on time, thanks to RERA registrations and enforcements by the Consumer Protection Tribunals. Statistics also reveal that PMAY, which has catalysed this housing boom, has funded about 45% projects in the beneficiary-led housing category. This is expected to reduce the housing deficit at the base of the demand pyramid. Even more significantly, the upto Rs 30 lakh category has become a formally actively searched category on Magicbricks. This reflects the steady confidence of buyers who earlier did not find stock that was affordable for them.”

The report stresses that the most preferred budget segment of Rs 30-50 lakh (23%) in Jul-Sep 2013-14 (FY) continued to rise to become 28% in the Jan-Mar 2014-15 (FY) quarter. This trend continued till 2018, when the demand for properties in the budget of Rs 30-50 lakh rose to over 30% of the searches (on Magicbricks platform), indicating a strong requirement for affordable options across India.

The latest Magicbricks data shows that supply remains less for properties Upto Rs 50 lakh as compared to demand. On the other hand, supply is higher for properties priced above Rs 50 lakh as shown in the graph. It shows that the push for affordable housing seems to be working and the supply is shifting slightly towards housing demand in the lower and mid-budget segments.

Listed property price data on Magicbricks from 2014 to 2018 shows that the supply of 1BHK apartments was high across urban Maharashtra in cities such as Mumbai, Navi Mumbai, Thane and Pune, while it remained in low supply in other cities. In Chennai, there is a lot of 1BHK supply in the lower price ranges, in the independent house category. 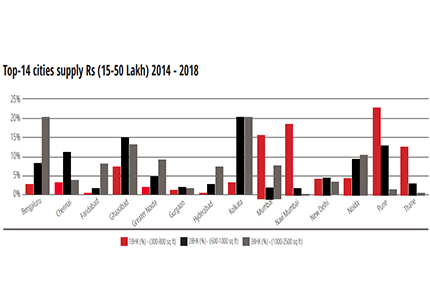 On the other hand, places like Noida, Greater Noida and other similar affordable locations mostly have demand for 2 and 3BHK housing units in the Rs 30-60 lakh range.

The data below hints at the supply-demand ratio of apartments in the Rs 15-100 lakh budget across the 14 cities studied. The demand and supply mismatch appears to be shrinking as more houses, in future, will be built as per the consumer’s need. 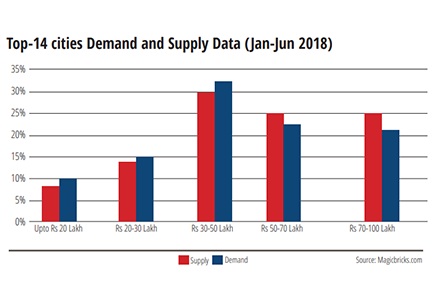 Emphasizing on the need for collaboration between the central government ministries, state governments, urban local bodies, civil society, private sector and financial institutions, the report highlights that a large population in India cannot afford to buy a home and thus, rental housing can be an alternative for such people.

By approving more than 60 lakh housing units, the housing shortage will come down by about 60% once all these units are handed over to their owners. This will also boost home ownership in India and encourage the government to push more aggressively for its target of ‘Housing for All by 2022’. The government and private sector needs to address the housing shortage issue inclusively, thereby catering to the demand of urban housing and at the same time, contributing significantly to India’s economic growth.

Magicbricks is India’s No.1 property site. With monthly traffic exceeding 12 million visits and with an active base of over 14 lakh+ property listings, Magicbricks provides the largest platform for buyers and sellers of property to connect with each other in a clear, transparent manner. With this in mind, Magicbricks has innovated several product features, content and research services, which have helped us, build the largest audience pool.