Other Asia-Pacific countries ranked in the top 10 include Shanghai, Sydney and Tokyo.

In the latest issue of The Wealth Report, launched today, Hong Kong and Singapore took two of the top five spots in a global ranking of cities that considers wealth, investment and lifestyle. Hong Kong ranked third and Singapore fourth in Knight Frank’s City Wealth Index 2019, a list that investors rely on to identify global urban powerhouses. Mumbai ranked 12th in terms of wealth on the index bettering its previous position of 18th in 2017.While Bengaluru was placed 60th in terms of investments superseding Mumbai and Delhi.

Other Asia-Pacific countries ranked in the top 10 include Shanghai, Sydney and Tokyo. Despite Brexit concerns, London took the number one spot overall, reclaiming the spot from New York, which dominated last year’s standings.

Growth in the region is noticeable with Asian cities holding five of the top ten spots in the wealth category. Besides Hong Kong, Beijing and Singapore, the ranking includes Seoul in seventh place and Shanghai in eighth. Mumbai jumps to the 12th rank from 18th highlighting significant wealth creation in the city.

Nicholas Holt, Head of Research, Knight Frank Asia Pacific, says, “The thriving cities of Seoul and Shanghai continue to benefit from buoyant economies, due to their statuses as financial centres with burgeoning technology scenes.”

Asian countries will also see the fastest growth in UHNWIs, defined as those with net assets of US$30 million or more, in the period between 2018 and 2023. Of the 59 countries and territories in Knight Frank’s forecasts, 8 of the top ten countries by future growth are in Asia.

North American cities led the ranking for investment, occupying six of the top 10 spots in this category with New York, Los Angeles, Washington DC and Chicago. In Asia-Pacific, besides Hong Kong, countries that are in the top 10 of the Index’s investment category include Sydney – which takes sixth place – and Singapore in ninth place.
“The rise of the Asian Pacific middle class will be a major driving force for growth and over the coming decade, ensuring that the region will offer an attractive proposition for investors,” adds Holt.

The lifestyle category of the City Wealth Index is based on key decision influencers drawn from Knight Frank’s annual Attitudes Survey. For instance, a significant factor for purchasing first and second homes internationally is education, represented by the number and quality of universities in a specific city. Security is another key factor, as are luxury indicators including the number of five-star hotels and the quantity and quality of leading restaurants.

While London dominated this category with its significant number of five-star hotels and the quality of its universities, Singapore swoops in for a tie in the number one spot, while Hong Kong and Tokyo hold the fourth and fifth spots respectively.

The City Wealth Index also highlighted cities of the future that are projected to attract investors in the coming years. These are Bengaluru, Hangzhou, Stockholm, Cambridge and Boston. Factors that drive the selection include innovation indicators, wealth forecasts, economic growth, and aspects that improve a city’s growth prospects, such as infrastructure. Cities that demonstrate these characteristics are likely targets for future property investment.

Shishir Baijal, Chairman & Managing Director, Knight Frank India, says“India’s economic growth and economic stability is reflected in the way our cities, specially Mumbai and Bengaluru have ranked on the city wealth index survey. With an average growth of over 7% in GDP, we expect wealth creation to be equally robust in coming years. Our survey already indicates an expected growth of 39% in UHNWIs which is indicative of the fact that these cities will also accumulate greater amount of wealth over the next few years.” 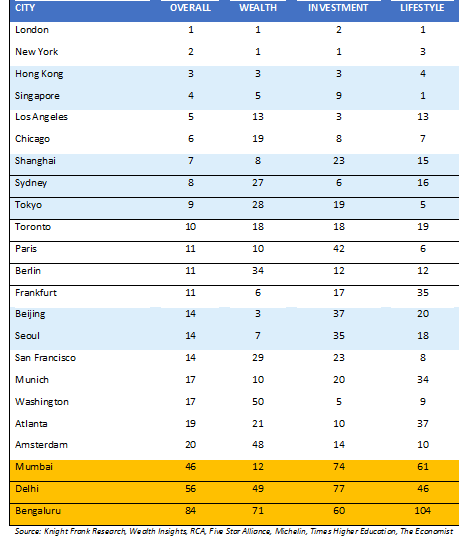 Definitions of each category –

2. Investment: To understand where the wealthy are investing, we assessed the most comprehensive data on major property investments (those worth the equivalent of US$10 million or more) by private individuals or family offices across both commercial and residential markets. Our ranking takes into account the volume of investment and its diversity in terms of the number of different nationalities investing.

3. Lifestyle: Drawing on our annual Attitudes Survey, we identified some key decision influencers. For example, education – quantified here by the number and quality of universities – is a significant driver for purchases of first and second homes globally. Security is another key factor, as are luxury indicators including the number of five-star hotels and the quantity and quality of leading restaurants.