Bengaluru is the world’s most dynamic city among 131 major established and emerging business hubs globally, according to the sixth City Momentum Index published by JLL today. Closely following Bengaluru is Hyderabad that is ranked second with Delhi (4th), Pune (5th), and Chennai (7th) featuring in top 10 cities. At 15th position, Kolkata was the sixth Indian city ranked amongst top 20.

With 19 of the top 20 cities from Asia Pacific, the rankings highlight and showcase the region’s continued rapid urbanization and strong economic growth. In the 2018 edition of the City Momentum Edition, Hyderabad topped the rankings followed by Bengaluru (2nd), Pune (4th), Kolkata (5th) and Delhi (8th). Tracking a range of socio-economic and commercial real estate indicators to identify attributes for success over the near term, the CMI focuses purely on short-term momentum over a three-year horizon. The rankings identify the urban economies and real estate markets which are currently undergoing significant rapid growth.

According to Ramesh Nair, CEO and Country Head, JLL India, “Some of India’s fastest growing cities have been successful in recent years in drawing high levels of foreign direct investment with structural reforms also encouraging greater interest from foreign real estate investors who are seeking to tap into the country’s favourable growth dynamics. Post the implementation of landmark policy reforms such as RERA and GST coupled with a focus on improving infrastructure and improving ease of doing business, the government’s reforms driven agenda and measures are expected to bring in more transparency in the real estate sector and give a strong impetus to the sector.”

“A key theme in this year’s index is of many of the top-ranking cities having a robust technology and innovation ecosystem. The technology sector is a key driver of both real estate and economic momentum, and is propelled not only by the large dominant tech firms but also by a robust start-up culture. Both Bengaluru and Hyderabad have a thriving information technology and start-up culture which has helped them top the rankings. As the Silicon Valley of India, Bengaluru has continued to witness much traction in its real estate sector over the years. Backed by a strong commercial sector, the city’s retail, hospitality and residential sectors have also gained prominence with the city being recognized as the third largest hospitality market and the leading retail market in India,” Nair said.

He added,” Hyderabad as an emerging investment destination has been in the spotlight for its growth potential and investments from all major technology led companies around the globe. The real estate market of Hyderabad has been one of the best performing in India for last few years in terms of the absorption and new launches.”

“Asia continues to show strong momentum, with cities that are successfully expanding their innovation economy punching above their weight in terms of attracting capital, companies and people. These cities need to address the environmental and social impacts of rapid growth such as social inequality, congestion and environmental degradation. The provision of smart, efficient and productive real estate and increased transparency are key factors in driving long-term sustainable growth,” said Jeremy Kelly, Director of Global Research at JLL. 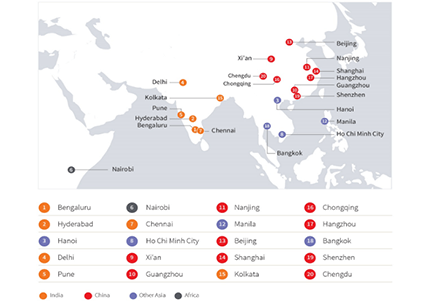 The absence of European and American cities demonstrates a marked East-West growth divide driven by globalization, innovation and demographic factors. In fact, the only non-Asian city on the list is Nairobi in sixth place which is heavily influenced by significant amounts of infrastructure-focused investment from China.

Although the global economic cycle is in its late stages, there are still many cities in the world where real estate and economic growth continue to be robust. But while strong growth brings opportunities for economic and social development, it also brings challenges that cities must address to ensure short-term growth transitions into long-term momentum. Investing in infrastructure and greater transparency is essential to facilitate this transition.

Sustainable long-term momentum and a maturing economy is often supported by long-term foreign direct investment and transparent governance is a key factor for international investors.

“Transparency is vital in securing the long-term investment that leads to sustainable growth. With strong governance and planning, the private sector can work with city governments to drive change and bring benefits to the real estate market and wider commerciality of a city,” added Kelly.

JLL’s City Momentum Index measures momentum for 131 of the world’s most commercially active cities by tracking a range of socio-economic and commercial real estate indicators over a three-year period to identify the urban economies and real estate markets undergoing the most rapid expansion. The City Momentum Index presents a weighted overall score for the sub-scores of 20 variables. For each variable the model calculates a score based on the city’s performance relative to the distribution of all 131 city regions, scaled from zero to one. The top-scoring city for each variable has a value of one, while the lowest-scoring city receives a value of zero. Variables focus on indicators of socio-economic momentum and commercial real estate momentum. All real-estate data is sourced to JLL. Non-real estate data is drawn from a wide range of sources that includes Oxford Economics, United Nations, ACI, GaWC and fDi Markets. The Index also sources data from many national statistical offices.