According to the Attitudes Survey launched today within the Knight Frank Wealth Report, 63% of survey respondents said the wealth of their ultra-high-net-worth individual (UHNWI) clients increased during 2018.Just over 20% reported no change, while 16% said it had fallen. The survey is based on responses provided by 600 private bankers and wealth advisers who between them manage over US$3 trillion of wealth for UHNWI clients. In Asia, the numbers showed a slightly more subdued growth, with 58% reporting an increase, 23% recording a fall and 18% who said there had been no change.

Survey question: On balance, how has the wealth of your clients changed over the past 12 months?

Against the prospect of continued higher interest rates and with the ongoing China and US trade tariffs, wealth advisors in Asia were among the least optimistic globally about their clients’ ability to create wealth in 2019.

According to the Attitudes Survey, 70% of wealth managers in Asia-Pacific said that the political and economic environment domestically and internationally will make it more difficult to create and protect wealth this year. Although 64% of the respondents expected the markets to rise, this proportion is noticeably lower than the 80% recorded in the 2018 survey. Singapore’s wealth advisors were the region’s least optimistic, with only 1 in 4 expecting their clients’ wealth to grow.

UHNWIs in Australia saw the most significant increase in wealth in 2018, with 93% of the advisors surveyed reporting an improvement in their clients’ fortunes, and 72% expecting their clients to become increase their wealth this year. Still, together with wealth managers in China, Hong Kong, Indonesia, South Korea, Taiwan and Singapore, they expect domestic politics and economic issues to make it more challenging to create and protect wealth in 2019.

“In early 2019, many of the trends that shaped the global economy in 2018 – from Brexit to trade wars to financial market volatility – appear still to be prevalent. However, financial markets have long since priced in the implications of these widely-discussed events,” says Nicholas Holt, Head of Research, Knight Frank Asia Pacific.

Amid a more cautious sentiment, the Attitudes Survey showed that Asia-Pacific’s UHNWIs are expected to allocate more of their wealth to cash and less cyclical assets such as bonds and gold. 57% of Asian respondents and 59% of Australasian respondents expect allocations to cash to increase over the next 12 months, higher than the global average of 48%. Notably, wealthy individuals in China and Malaysia are expected to increase their exposure to gold, a typical ‘safe haven’ asset during times of uncertainty.

In India, where the volume of wealth is rising the fastest globally, UHNWIs in the country are expected to decrease cash exposure and increase their allocation to private equity in 2019 as local investors grow in sophistication.

Survey Question: On average, what proportion of your clients’ investment portfolios is allocated to the following asset classes? 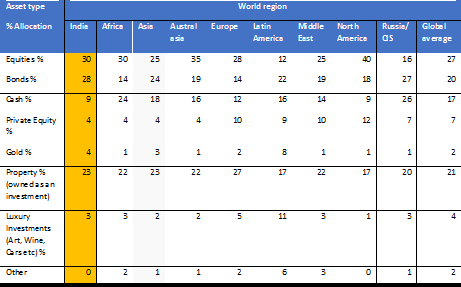 With prospects for capital growth and rental yields, property remains a cornerstone of wealth portfolios across the region. According to the Attitudes Survey, real estate makes up 23% of UHNWI portfolios in Asia, higher than the global average of 21%.

In 2019, 28% of the survey respondents in Asia said they would be increasing their exposure to property, 42% said allocations would remain the same, while 20% said they would decrease – showing some profit taking in some markets.

The Philippines has the highest ratio of people who would buy compared to those who would sell in the coming year. 63% of respondents in the Philippines said that exposure to real estate would increase in 2019, compared to just 9% who expect allocations to decrease. In contrast, in Australia, 40% of the wealth managers surveyed expected allocations to property to decline and 20% said there would be an increase over the next 12 months.

“We are seeing a rebalancing of portfolios away from equities towards more defensive asset classes, amid more cautious sentiment. While cash, gold and private equity are likely to be increasingly targeted, investment grade property with strong tenant covenants will also see significant interest over the next 12 months,” says Holt.

Liam Bailey, Global Head of Research at Knight Frank says, “We have noted in previous years a growing desire from UHNWIs to increase the share of their portfolios dedicated to property. This trend has been confirmed by the growth in the average number of homes owned by wealthy people increasing from 2.9 to 3.6 over the past year.”

“Despite prices in key global markets growing at a slower pace than previous years – investment in property remains and our study confirms this with a global average of 21% of UHNWIs’ investment portfolios being allocated to this asset class,” Mr. Bailey adds.

Survey Question: How do you expect your clients’ allocation to the following asset classes to change in 2019 (expressed in net balance of respondents*)?

For the year 2018, Indian respondents gave a thumbs up to equities (30%) and bonds (28%) where respondents to the survey said that their clients preferred these high return investment assets. Real Estate with 23% was the third most invested asset class by Indian UHNWIs. Interestingly, liquidity was not the preferred asset which made up only 9% of the total investments of Indian ultra – rich.

In the Indian market, there is a strong bend towards Equities (34%) and Private Equities (37%). Private Equity which saw only about 4% of wealth allocation in 2018 is set to see a significant rise in 2019. Bucking the global trend, Indian UHNWI showed least preference for the most liquid of all assets, i.e. cash, which registered a negative sentiment of -15%. A strong trend was also witnessed in bonds investment for which sentiments saw a rise of 20%.

Shishir Baijal, Chairman & Managing Director, Knight Frank India, said, “While globally UHNWIs are showing affinity towards more liquid investments as it is the most risk averse asset, Indian counterparts on the other hand are increasing their exposure in the equity and bonds. There is a sense of confidence amongst Indian UHNWIs on the strength of the countries economic growth which is pushing them to invest in higher risk assets for shorter periods of time. Real Estate (0%) and Luxury Investments (5%), which are the most illiquid asset amongst remain largely stable.”