Buying a home easier today as affordability improves across India

In a recently concluded studyby Knight Frank India,Mumbai showed maximum improvement in affordability since 2010. The report evaluates top eight markets of India, to assess the affordability of homes, and notes that affordability in other cities including National Capital Region (NCR)and IT Hubs of Bengaluru and Hyderabad have also seen an improvement.

Knight Frank’s proprietary Affordability Index examines the house price to income at a given period of time. Ideal
affordability is identified at 4.5 times the average annual household income in a city. Except for Mumbai (7), NCR (5) and Hyderabad (5), all other the markets are below the 4.5 affordability benchmark. Mumbai, while still recording a high ratio of 7, has experienced the sharpest improvement.

Key findings of the report:
• Mumbai is India’s most expensive housing market but has seen the affordability of homes significantly increasein the last few years. It is now estimated that a house in Mumbai will cost approximately 7 times the annual household income against 11 times in 2010. This ratio has similarly come down to 5 times for the NCR and Hyderabad against 6 times in 2010.
• Bengaluru and Chennaihave seen affordability levels improve with ratios coming down to 4 times in comparison to 6 and 5 times respectively since 2010.
• Kolkata, Ahmedabad and Punehave shown improved markets in terms of affordability since 2010 and apartment prices here stand at just 3 times of their average household incomes.

Shishir Baijal, Chairman and Managing Director, Knight Frank India, said, “Housing is one of the most persistent challenges faced by urban centres across the globe today. India, which is also faced with these challenges however is witnessing a gradual improvement in the area. A decline in average ticket size and focus on affordable housing have improved home affordability across the country to a large extent. The fact that affordability statistics have moved dramatically since 2010 explains why sales have finally improved in 2018.”
Shishir further added, “With a focus on creating housing for all by 2022 and to bring back the real demand for housing in the market, improving affordability will be imperative. We can expect a further strengthening of affordability in the near futureas more affordable and mid ranged projects are undertaken by development companies.”

In addition to reducing prices, the report also notes that there is a decline in average size of residential unitsat launch in the period of study which has contributed to the growing affordability in the market. Markets of Mumbai (-
25%), Pune (-24%) and Bengaluru (-18%) have seen sharp reduction average size of homes since 2010. Hyderabad (+4%) and Ahmedabad (+7%) are the only two markets that are offering larger homes. With annual sales reducing across all major markets, the shift towards making homes more affordable is visible.

Annual apartment sales peaked in 2011 and since recorded consistent year on year decline till 2017. This pushed up the unsold inventory levels forcing developers to re-strategies, especially over the past two yearsto entice the buyer and move inventory. The establishment of the RERA Regulator has further accentuated their need to stick to construction timelines and has further compelled developers to reduce prices to push sales. The strategy has reaped dividends as the market saw annual sales volumes finally grow over the previous year in 2018for the first time in seven years.Structural reforms have played a significant role such asBenami Transactions (Prohibition) Amendment Act, 2016 and demonetisation of high value currencies, along with Real Estate (Regulation and Development) Act (RERA), 2016 and Credit-LinkedSubsidy Scheme (CLSS),the Pradhan Mantri Awas Yojana (PMAY), a scheme that aims to ensure 20 million affordable homes by 2022 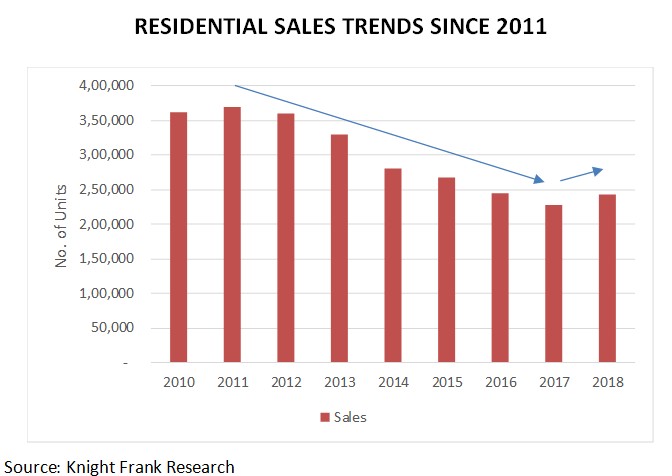 Separately, in a global report by Knight Frank- Urban Futures, Mumbai emerged as one of the most affordable cities amongst its global peers.Urban Futures evaluates 32 cities across the world to understand the difference between house prices and income and estimates the gap to be US$740 billion in 2018 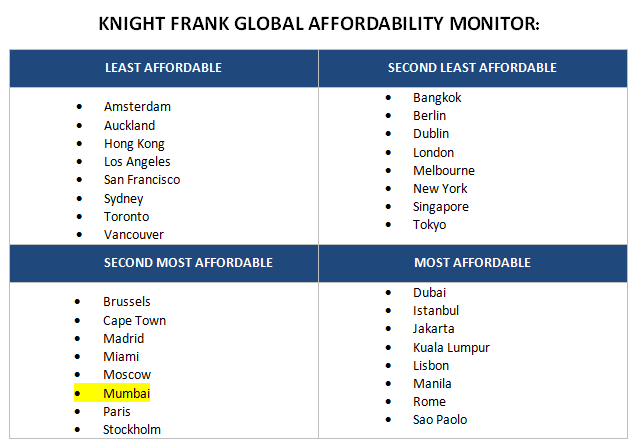