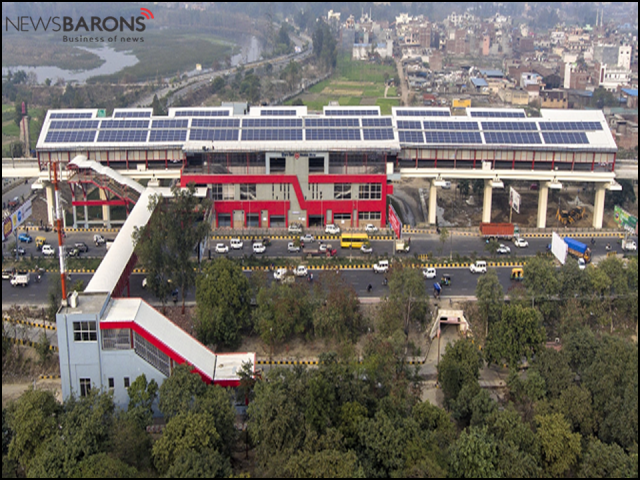 Delhi Metro Rail Corporation (DMRC) has inaugurated its INR 778 crore first line extension constructed by TATA Projects led JV. This 9.63 km Dilshad Garden-Ghaziabad New Bus Adda elevated extension is along the first line alignment and includes a 170-metre bridge across the Hindon River. Work on this Delhi Metro first line extension commenced on December 2014 and includes stations such as Shahid Nagar, Raj Bagh, Rajender Nagar, Shyam Park, Mohan Nagar, Arthala, Hindon and New Bus Adda. This is the first metro line to reach the interiors of Ghaziabad and will be a boon for millions of commuters who travel to Delhi for work or other purposes each month.

• The 3.68 km underground extension to Lucknow Metro’s first line successfully executed & completed before deadline; Tunnelling alignment passes under thickly inhabited areas including below Haider Nallah with clearance of merely 970mm
• The 9.63 km Dilshad Garden-Ghaziabad New Bus Adda elevated extension is the first metro line to connect the interiors of Ghaziabad to Delhi, to benefit more than a million people.

The stations have also been planned differently with two separate small buildings on either side of the alignment thereby allowing speedy construction through elevated viaduct and track laying remained independent of station buildings. The length of the platforms at all stations is 185 mts and height from the ground level is about 13.5 mts. In addition, all the stations have been designed with disabled friendly features.

Lucknow Metro Rail Corporation (LMRC) today inaugurated its Phase 1A (Underground) extension constructed by TATA Projects led JV. This 3.68 km Hussainganj-Hazratganj extension passes through the heart of Lucknow and its bustling areas. Work on Lucknow Metro 1A line commenced on April 2016 with expected completion of around April 2019. However, the sustained efforts of the LMRC and TATA Projects led execution team ensured completion much before schedule. This new metro line includes stations such as Hussainganj, Sachivalaya and Hazratganj.

“We are delighted to provide a world-class metro line to Lucknow. The new line will provide a fillip to development, ease commuting and serve nearby communities. Using latest technology, we have ensured completion before the deadline,” said Vinayak Deshpande Managing Director, TATA Projects Limited.

The project involved tunnelling under thickly inhabited areas with heritage structures thereby requiring rigorous instrumentation and monitoring. Construction of tunnel below Haider Nallah was executed with a clearance of merely 970mm.