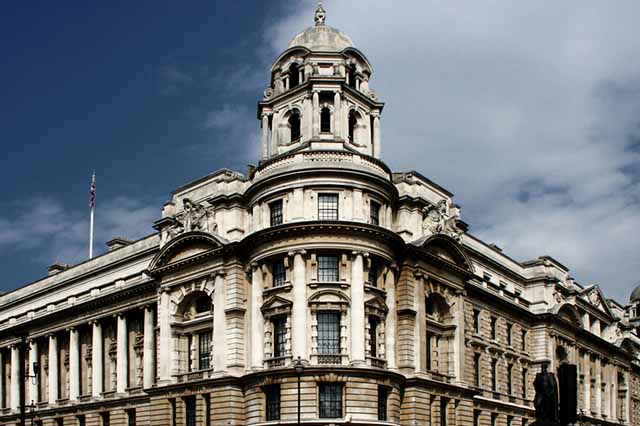 London’s Old War Office, which was closed to the public for over a century, is now being transformed and will be open to the public by 2022 as The OWO (Old War Office). The landmark address, which has its legacy tied with the legendary Winston Churchill, will constitute 85 Raffles branded residences, for which Knight Frank and Strutt & Parker are the official sales partners. The address will also house 125 rooms and suites at the first Raffles London hotel, 9 restaurants and bars and an immersive spa.

The OWO (Old War Office) was acquired by The Hinduja group in 2014, working with a team of experts, including Historic England and Museum of London Archaeology, and appointed EPR Architects to oversee the intricate redevelopment of the iconic building.

Once witness to world-shaping events whilst influential political and military leaders held office, including Winston Churchill and David Lloyd George, this iconic London property promises to be an equally prestigious residential address. The OWO Residences will offer fully serviced duplex, lateral, and penthouse residences ranging from studios to five – bedroom homes. Homeowners will also benefit from having access to residents-only facilities like the private landscaped garden, 7 lounges, a private dining room, games room, cinema, gym, 3 training studios, and treatment suite without having to compromise on the highest levels of privacy and seclusion within their home. Furthermore, they will have access to the 20m hotel pool and 9 restaurants. The price point for a 2 bedroom start from GBP 5.8 million.

The OWO (Old War Office) was acquired by The Hinduja group in 2014, working with a team of experts, including Historic England and Museum of London Archaeology, and appointed EPR Architects to oversee the intricate redevelopment of the iconic building. The interiors of the hotel are designed by New York based French architect and designer, Thierry Despont, who specializes in unique and high end designed residential projects, hotels and historical renovations.

According to Knight Frank’s ‘The Wealth Report -2021’, UK stood third-most preferred real estate asset class for Indian HNIs to buy second homes. Purchases by Indian HNIs are a significant driver for the boom in luxury real estate in the UK. In 2019, 79% of the HNIs from India were looking to invest in the UK, citing a great interest in UK’s property market amidst ultra-wealthy Indians. For Indians planning to expand the oversee real estate portfolio this historically significant property will add real value.

Gopichand P Hinduja, Co-Chairman, Hinduja Group commented “Launching sales of these extraordinary residences is a significant milestone for us as a family and for the project team at The OWO – it’s one step closer to opening the storied building to the public for the first time where branded residences will sit alongside a flagship Raffles hotel. London is one of the best cities in the world, steeped in history and tradition, and has been our home for over forty years.”

He further adds “With our knowledge and experience in restoration of historic buildings, everything we do, and every decision made on The OWO is underscored by our passion and respect for the heritage of the building and long-term commitment to London.”

Shishir Baijal, Chairman & Managing Director, Knight Frank India commented “London has been a preferred destination for India’s high net worth individuals for a long time as many Indians purchase homes in the city for investment and personal use. In recent times the penchant for ownership of landmark properties has also risen. While in India, most buildings of historic legacy are not available for private residency and are generally being converted into hotels, properties such as The OWO in London are a perfect opportunity for Indians to own a part of a legacy property in their portfolio. The OWO, will provide its owners with bespoke luxury, fully serviced from butlers to nutritionist courtesy of Raffles Hotels & Resorts, along with an experience to own an important part of modern history. It is a privilege for Knight Frank to be the marketing and sales partners of the residential units in The OWO.”