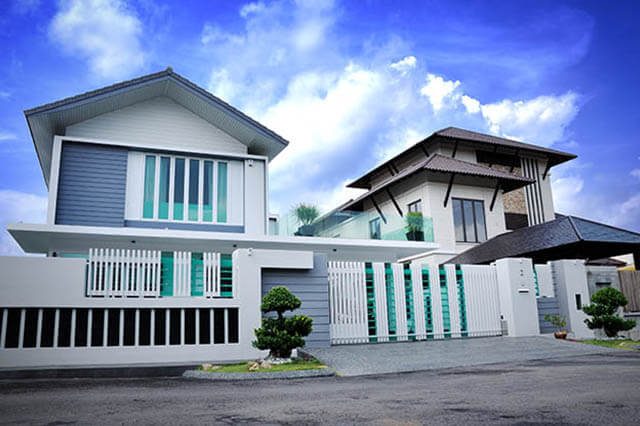 Top cities like NCR and MMR collectively account for 72% of the total stuck housing units across the top 7 cities worth INR 3,49,010 Cr – nearly 77% of the total worth of the stuck projects

If there is one ‘inheritance’ that the Government in power post the upcoming elections will not look forward to, it is tackling the issue of the massive burden of stuck housing across the top Indian cities.

Despite the setting up of a regulatory mechanism, countless homebuyers have been left in the lurch by their builders. Sadly, most of these stuck projects do not fall within the RERA ambit as they were launched years before it was implemented.

Also, with many states having diluted the Centre’s original RERA rules, homebuyers have only the courts to approach – a notoriously tedious task in India.

As per ANAROCK data, the top 7 cities currently have a total stock of 5.6 lakh delayed housing units worth a whopping INR 4,51,750 Cr. These units were launched either in 2013 or before that. Lakhs of buyers across top cities – particularly MMR and NCR – have been left in limbo, leading to inconceivable mental stress and financial pain.

Top cities like NCR and MMR collectively account for 72% of the total stuck housing units across the top 7 cities worth INR 3,49,010 Cr – nearly 77% of the total worth of the stuck projects. In comparison, the main Southern cities of Bengaluru, Chennai and Hyderabad together account for a mere 10% of the overall stuck housing units of a total worth of INR 41,770 Cr. The Southern cities have predominantly been driven by service-class end-users, leaving limited scope for developers to be unprofessional. 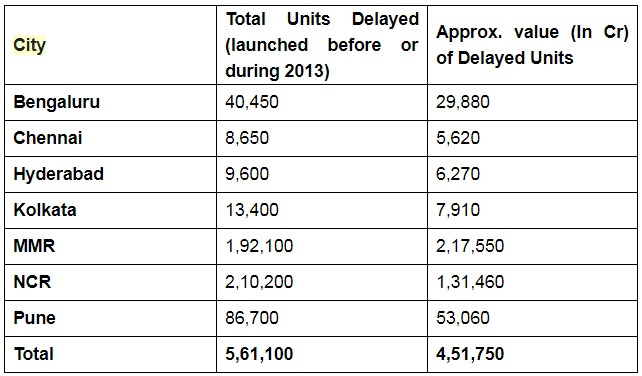 Interestingly, among the two major IT destinations, Bengaluru is far better off than Pune in terms of the total number of delayed/stuck projects. The Silicon Valley of India has less than half of the total delayed stock in Pune (of 86,700 units). Chennai has the least project delays during this period, with around 8,650 units worth INR 5,620 Cr.

Why Projects Got Stuck

Besides some developers’ lack of real will to complete their projects and preference for funds diversion, the tightening credit crunch has been one major factor contributing to this mounting problem. It has become a ‘chicken and egg’ situation – buyers have understandably stopped releasing funds to builders, and builders claim they have no funds to complete construction.

Also, every delayed project results in cost overruns which compound the funding crunch even further. Lack of project clearances for whatever reason also contributes to the piling up of housing stock. In the pre-RERA era, many builders launched greenfield projects without the requisite approvals in place, resulting in their projects getting stuck.

As one of the possible solutions out of this mess, the Government-owned NBCC has been roped in to complete some stalled projects in NCR. This is a significant move which, if applied in larger numbers, can have a real impact.

Moreover, even if NBCC picks up 50% of overall stalled projects, the resultant construction activities would create significant employment for the EWS and LIG segments, which are also the key target segment for affordable housing.

Additionally, with the Government-owned NBCC undertaking construction, banks’ apprehensions about funding construction would ease. Most stalled projects have considerable monetizable assets in the form of land banks and FSI, which the NBCC can use to cover some of the construction costs.

By amending the Insolvency and Bankruptcy Code and treating buyers at par with banks and other creditors, the Government has further safeguarded the interests of affected buyers. With this provision, even when builders opt for bankruptcy, the state authorities will intervene to safeguard homebuyers’ investments.

Besides monitoring cash inflows of the concerned entity, the Government will try and ensure that the project is completed either by the developer himself or by outsourcing its completion to a third party. However, buyers are still awaiting their final outcome of these interventions.