Knight Frank India, the leading international property consultancy, today launched a report titled “Co-Living – rent a lifestyle.” The report which is based on a survey observes that 72% of millennials (18 – 23 years) have given co-living spaces a thumbs-up and over 55% respondents in the age group of 18 – 35 years are willing to rent co-living spaces. The survey was undertaken across top cities of India, including Mumbai, Bengaluru, Pune, Hyderabad and NCR and received responses from a cross section of people between the ages of 18 – 40 years of age.

The survey also observes that close to 40% of all respondents are most comfortable in paying between INR 120,000 – 180,000 per annum towards rental housing in key cities of India. The sweet spot for rentals thus remains at a monthly outflow of INR 10,000 – 15,000. 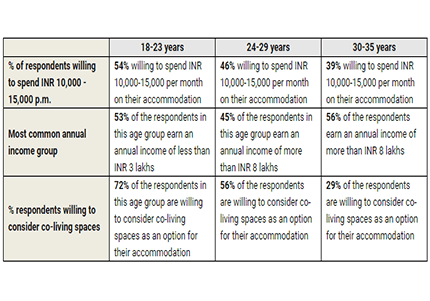 Shishir Baijal, Chairman and Managing Director, Knight Frank India said “Co-living aims to create a community-centered living environment that not only provides privacy in living arrangements but also promotes social contact through community spaces and programs. As an asset class, the biggest driving force behind the rising popularity of co-living spaces are young renters moving to new cities who are looking for easy access and reasonably priced rental accommodation. Though the concept is novel, it’s here to stay, as Indian millennials currently account for 34% of the total population which is expected to increase to 42% by 2025. We feel that with the recent acceleration of growth in migrant population to key cities, organised players rental housing will be able to bridge the housing gap.”

Co-living inventory presents a lucrative rental income opportunity for developers / owner operators. The study says that a stable co-living facility generates net yield of approximately 12%, while rental yields from a traditional 1BHK remain at 1.5 – 3%. Co-living further enhances revenue potential as cost of shared spaces such as kitchen and living rooms is amortised over a greater number of bedrooms than in a traditional residential development.