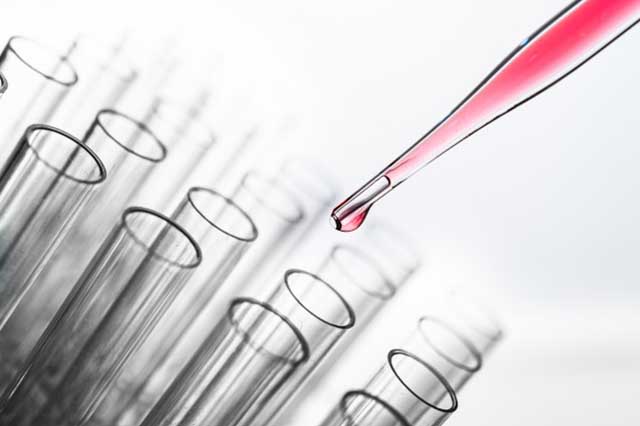 Morepen Laboratories Ltd. is eyeing an all new multi-billion dollar global API (Active Pharmaceutical Ingredients) market with the addition of new molecules in its bulk drugs portfolio. The focus areas of these new molecules include chronic and lifestyle diseases like anti-diabetic, anti-hypertensive, cholesterol reducers and neuro-psychiatric. Global patent expiry for these new molecules is slated in next 5-6 years. These new molecules are currently under development and would come into play in phases over the next 24 to 36 months.

Sushil Suri, Chairman and Managing Director, Morepen Laboratories Ltd. said ‘The company is gearing fast to strengthen its portfolio with a strong pipeline of products in all the aforesaid focus areas, to be launched over the next three to four years in both domestic as well as international markets. The company is investing heavily in its R&D and in building new product blocks while simultaneously creating additional capacities to facilitate production of these new molecules’.

‘Enthused by the Government’s push in the recent Union Budget for increased investment in R&D and other infrastructure development in the pharmaceutical and healthcare sector, the Baddi based API giant, has chalked out a long term backward and forward integration programme that would see a consistent rise in its sales and profitability on a year-on-year basis’ he added.

Better margin realization has helped Morepen Labs in reporting a rise of 120 per cent in its Net Profit after Tax (Consolidated) at Rs. 23.79 crorein Q3’FY 2020-21.

Net Revenue (Consolidated) rose by 32 per cent at Rs. 310.26 crore in Q3’FY 2020-21 and by 39 per cent at Rs. 909.36 crore in the nine months period ended December 31st 2020, mainly on account of a consistent growth in sales of Bulk Drugs (APIs) and a significant growth in the sales of Diagnostic Devices during the last two quarters of FY 2020-21. Formulations and OTC products also registered a stable jump.

API business maintained its lead contributing 54 per cent to the company’s topline in Q3’FY 2020-21. API Sales Revenue during the quarter grew by 25 per cent at Rs. 165.03 crore. Within the API segment, four key products Loratadine, Montelukast, Atorvastatin and Rosuvastatin contributed Rs. 143.72 Crores to the company’s topline and registered a remarkable growth of 25% over corresponding quarter in the previous fiscal. 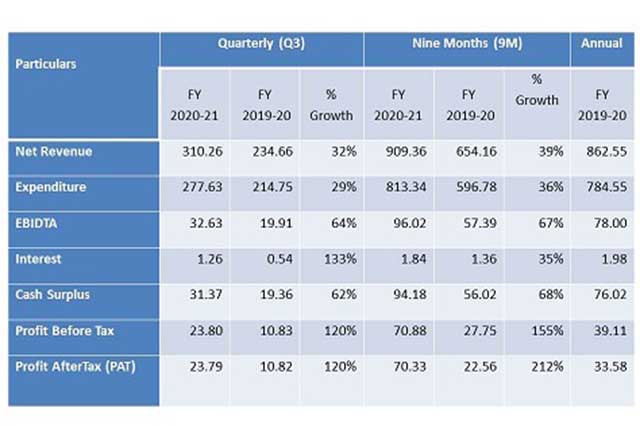 API Exports recorded an impressive growth of 23 percent at Rs. 110.39 crore in Q3’FY2020-21. Domestic API business recorded a growth of 28 per cent at Rs. 54.64 crore with an improvement of 20 per cent in the sales of Montelukast. For the nine months period ending December 31, 2020, export revenues from USA recorded a growth of 43 percent, closely followed by 40 per cent revenue growth from the Asian markets. South American and African markets also recorded handsome growth of 59 per cent and 31 per cent, respectively.

During the current year, company has filed four new patents for US and Indian markets in addition to 125 existing patents in its portfolio thus strengthening the IPR (Intellectual Property Rights) basket of the company for various New Products. Five new products in the anti- diabetes, anti-depressant, and anticoagulant segments have been developed by the company’s Research and Development (R&D) centre during the first nine months of the current fiscal. Morepen Labs has also filed nine Drug Master File (DMF) in the United States and one more Import Drug License (IDL) for Chinese Markets taking the tally to 120 DMFs and 10 IDLs.

Company’s Board has recently approved a mega expansion plan involving an outlay of Rs. 178 crore. The expansion plan has already been cleared by Himachal State Government under single window clearance scheme. It would add 2000 MT p.a. of APIs manufacturing capacity in addition to 3000 MT p.a. capacity already installed, and also generate additional employment for about 700 people. The company is awaiting environmental clearance by State Level Approval Committee for this expansion project.

Additional capacities will facilitate production of over 40 new and existing bulk drugs covering various therapeutic categories including anti-diabetic, anti-hypertensives, anti-allergic, anti-asthmatic, cholesterol reducers, anti-viral, anti-coagulants, anti-psychotic and anti-depressants. The expanded capacity is likely to commence commercial production over the next three years. The company proposes to fund the expansion primarily through internal accruals.