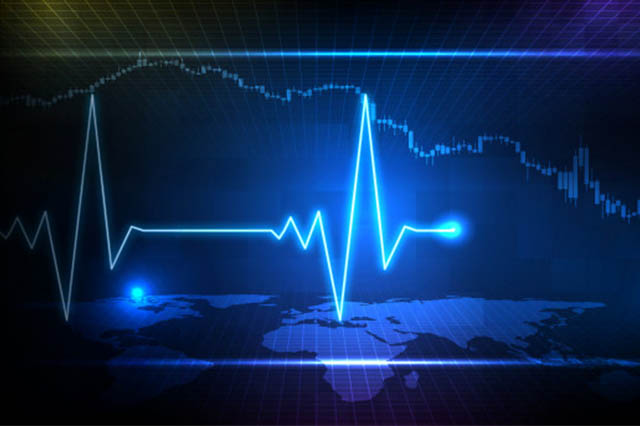 When it comes to health infrastructure, Pune is the most equipped city in India, offering 3.5 hospital beds per 1,000 people, shows a recent report by leading online real estate portal Housing.com.

Only half a bed is available for every 1,000 people in public hospitals.

This is much higher when compared to India’s national average, in the public healthcare system, there is only half a bed and 1.4 beds available, if we count public plus private hospital beds available per 1,000 people in India, shows a report by the Elara Technologies-owned online realty firm.

The report titled ‘State of Healthcare in India – Indian cities through the lens of healthcare’ ranks health infrastructure in the country’s most urbanised eight cities – Ahmedabad, Bengaluru, Chennai, Delhi-NCR, Hyderabad, Kolkata, Mumbai (MMR) and Pune through its Housing.com’s City Health Card. The top-ranked city Pune also scored significantly high on parameters such as ease of living, water quality and also performance and sustainable initiatives taken by its local government.

65 percent of the total hospitalisation cases in urban areas belong to private hospitals.

These rankings are benchmarked against parameters such as number of hospital beds, air quality, water quality, sanitation, liveability index, etc.

“India, which is the third-largest economy in Asia, needs to significantly increase its spending on healthcare. This has been made eminently clear as the country is currently struggling to keep its people safe from the ongoing second wave of the coronavirus pandemic. As the second most populous country in the world with over 1.3 billion people, India also has to focus on building quality healthcare infrastructure and economically develop itself in such a way that its overall infrastructure is preventive against health risks. Here, one is also forced to acknowledge how crucial quality housing is, in reducing health risks,” said Mani Rangarajan, Group COO, Housing.com, Makaan.com and PropTiger.com.

With nearly 3.2 hospital beds per 1,000 people, Ahmedabad is ranked second in the list while India’s Silicon Valley Bengaluru is ranked third, despite a high number of hospital beds per 1,000 people and its top ranking in the ease of living index, as parameters such as air quality, water quality and availability, and municipal performance index pull down the city’s rank.

The Delhi-National Capital Region, which covers the national capital, Gurugram, Faridabad, Noida, Greater Noida and Ghaziabad, was ranked the lowest in the list, primarily because of the region’s poor scores on air and water quality, sanitation and performance of municipal bodies.

“The density of hospitals is lower in Ghaziabad and Greater Noida regions compared to Gurugram, Noida and Faridabad which also have higher levels of service sectors, warehousing and manufacturing activity,” says the report.

India’s financial capital Mumbai and its metropolitan region— also the largest residential real estate market in the country with a transactional value of $2.5 billion in the first quarter of 2021 —- were ranked fourth on the Housing.com City Health Card, with parameters such as the number of beds, air quality, and liveability pulling its overall score down.

Even with the addition of private hospital beds, India remains in deficit.

Where does India stand in its healthcare spending?

The report that provides a perspective on nations’ preparedness in terms of providing health services to its people, also states that India is among the countries with the least public health spending and high out-of-pocket expenditure.

According to the report, India spent only 3.5% of its GDP on healthcare in 2018, as compared to developed countries like the US, the UK, Japan, Germany, and Canada which spent nearly 10–18% of their GDP on healthcare. This spending includes both the public healthcare spending and out-of-pocket expenses.

“It is a matter of great concern that despite an impressive economic growth trajectory and healthcare initiatives, India continues to underperform compared to other countries,” the report said.

Globally India is at the lowest end on healthcare parameters. 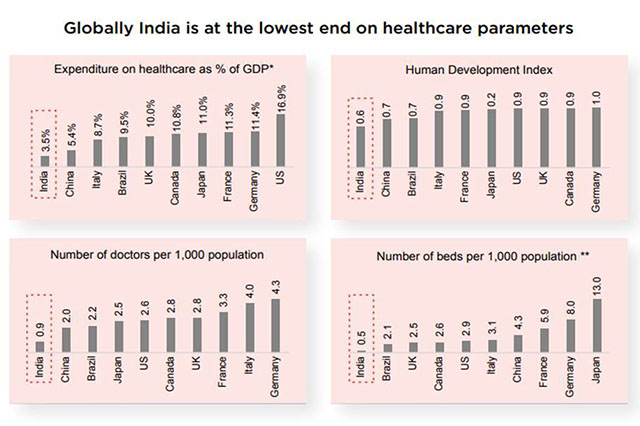 **The number of beds per 1,000 population include public hospital beds.

“As quality housing remains integral to health, states should come up with more reformative measures to ensure a larger number of its citizens are able to afford housing, which acts as a preventive measure against health risks. Though developing better healthcare infrastructure will require a well thought-out medium-term plan, and would take some time to build, states could immediately launch measures in the form of stamp duty reductions to provide their citizens better protection against health hazards in the form of affordable housing and better community living which has easy access to all amenities,” said Mani Rangarajan.

Ankita Sood, Head of Research, Housing.com, Makaan.com & PropTiger.com said “The second wave of COVID-19 pandemic has highlighted the significant work to be done in India’s healthcare infrastructure. India expends only 3.5 percent of its GDP on healthcare, as opposed to 10-18 percent spent by developed economies. The gravity of the gap is manifested in the not so encouraging statistics on the number of hospital beds available per thousand people, which in India is abysmally low at 1.4 beds as against the global average of 3.2. This glaring paucity translates into a shortfall of 2.4 million beds (public + private) with the majority being concentrated in our urban areas alone. Our Housing.com’s city health card also observes that residential development in our top eight cities is skewed, with the health care services not adequately complementing the scale and direction of residential development.”

For the City Health Card methodology, hospitals with more than 100 beds have been considered. The data available for each hospital are taken from government sources and/or official hospitals’ websites.