Industrial growth is expected to pick up to 8% in Q1 from 0.1% last year. In part, a favorable base effect is likely to support growth in the first quarter.

Since the beginning of this fiscal year, the external environment has been challenging, India’s current account deficit has widened, oil prices have been volatile, and the rupee has dropped to all-time lows. In contrast to this backdrop, the GDP growth numbers for the first quarter are likely to bring some good news.

We expect growth to rise to 7.6% in Q1 2018-19 from a sub-6% figure in Q1 last year. In part, a favorable base effect will prop up growth numbers across sectors in the first quarter. However, it is not all just a statistical push and there are some genuine signs of revival in the economy. The major push to growth is likely to come from the manufacturing and the service sector while agricultural growth is also likely to be supportive. On the demand side, private consumption could gain some traction especially on the back of stronger demand as shown by lead indicators like domestic passenger traffic, retail credit and consumer durables.

It would be important to see how sustainable the pickup in investment activity has been in the first quarter of 2018-19 after it rose by 14% in the last quarter of 2017-18. RBI’ OBICUS survey has been showing an encouraging trend in this regard with capacity utilisation rates picking up to 75% in Jan-Mar quarter from 71% in the beginning of the 2017-18.

We expect GDP growth to rise to 7.6% in Q1 2018-19 from 5.6% same time last year. Lead indicators show strength in the manufacturing and the service sector. Also, with the rise in the rabi output (which hit the market in Q1 FY19), agriculture growth is likely to grow by 4%.

Looking ahead: While the recent fall in the rupee is likely to provide some support to exporters, rising global protectionism and slower global growth might limit the pickup in exports this year. Therefore, the major support to growth needs to come from a sustainable recovery in private consumption and investment. Further, we expect government expenditure to continue playing an important role in supporting growth. For the year, as a whole, we expect growth to rise to 7.3% from 6.7% in 2017-18. Major risks to growth include rising oil prices and the impact of an uneven monsoon on agricultural production. 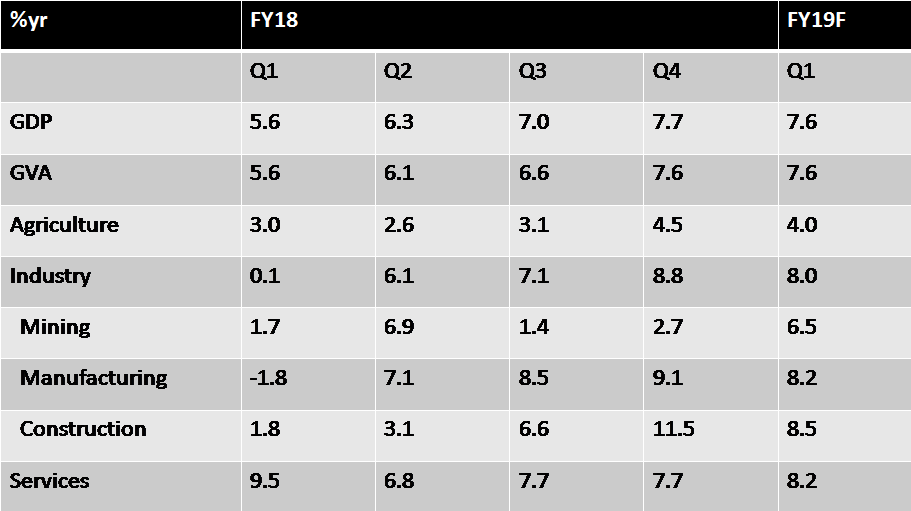