India’s retail inflation came in lower than market expectations for the eighth consecutive month. This time, the downside surprise was not just on account of food, but other items like clothing, footwear, and tobacco also recorded lower than expected inflation. Fuel and light inflation was at its lowest level since 2012 (the start of the inflation series), primarily on account of the cut in LPG prices in January.

Food prices declined by 0.7% MoM on account of the downward momentum in Fruits (-2.9% MoM), Vegetables (-2.8% MoM), Sugar & Confectionary (-1.1% MoM), and Spices (-0.8% MoM).
Fuel inflation moderated from 4.5% YoY in December to 2.2% YoY in January. The decline was primarily on account of a cut in LPG prices in the month of January. For the subsidized cylinder, domestic cooking gas (LPG) price was cut by Rs 5.91 per cylinder to Rs. 494.99 at the start of the month (-1.2%) while the price of non-subsidized or market priced LPG rates were cut by Rs. 120.50 to Rs. 689 per 14.2kg cylinder (-14.9%). This is what transpired into lower fuel inflation in the overall CPI basket and shaved off around 0.1 ppt from the headline number.
Core-core inflation (CPI ex Food, Fuel, Petrol and Diesel) moderated to 5.4% YoY in Jan-19 from 5.4% in Dec-18. The sequential momentum also softened on the back of easing inflation for Clothing & Footwear categories and also some items in the services category. However, inflation for the healthcare and education services, especially for the rural areas, which shot-up unexpectedly in December remained high in January as well at 10.1% and 9.5% respectively. 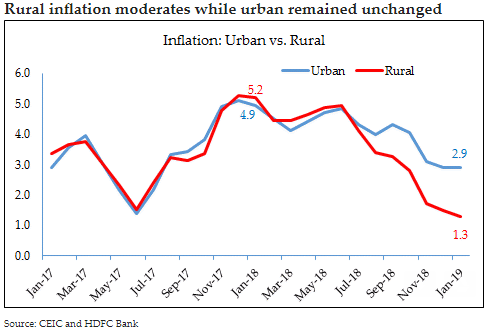 IIP growth picks up but remains in a subdued territory

Industrial production growth in India recovered in December to 2.4% YoY from an 18-month low of 0.3% YoY in November. However, the annualized reading still remained lower than the FYTD average of 4.7% and also, adjusted for the seasonal discrepancies, the rise was at a modest 0.1% MoM in January.

The mining output contracted by 1.0% YoY in Dec-18. Meanwhile, the manufacturing sector showed a recovery to 2.7% YoY, contrary to what the other lead indicators like PMI and core sector data suggested (weak momentum continuing).
On the use-based side, the silver lining was that the capital goods output recorded a positive growth despite an unfavorable base effect. This should come as a relief, especially when the category showed a decline of 3.1% YoY in November. Somewhat worrying aspect was the second straight month of decline in the intermediate goods output on account of contraction in output for copper bars, rods and pig iron.
In terms of specific products, furniture recorded the weakest numbers followed by coke and refined petroleum products. On the other hand, tobacco products, transport equipment and wearing apparel were the major drivers on the positive side.

Putting it all together

CPI reading has been lower than expected but it doesn’t change our view that the inflationary pressures are likely to remain subdued in the economy. It just reinforces it further. On account of sustained downside in food inflation, we have further revised our FY19 inflation estimate from 3.6% to 3.4% and for FY20 from 4.0% to 3.6%. The latest inflation reading actually reinforces our expectations for a rate cut in the April meeting of the RBI. 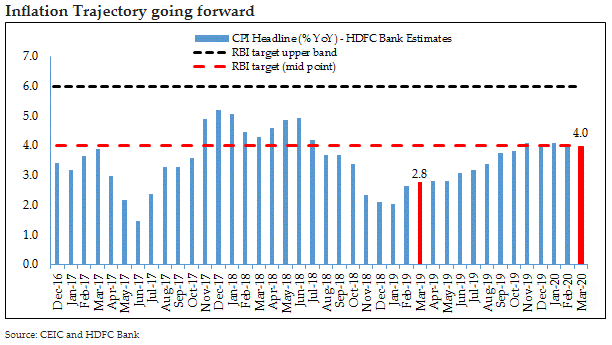 The IIP growth might have recovered from the lows of December but the details are mixed and we still cannot categorize the current growth dynamics as broad-based. Given the weakness in the intermediate goods, the moderation in the PMI readings, and the weak mining sector growth, it would be safe to conclude that the economy still needs some hand-holding in the form of government investments (higher fiscal spending) and monetary easing in the form of cut in interest rates.
We expect the bond markets to react in a positive fashion today with some buying at the current levels. Expectations of another rate cut in April could lead to marginal decline in the benchmark bond yield to around 7.2% levels in the short term before the borrowing anxiety kicks-in and lead to reversal in the yields trajectory June onwards. For our detailed outlook on bond yields, read “Central Bank Watch: ‘Growth’ is back in the RBI’s vocabulary”, 7th February 2019.
On the international front, the mood was somewhat positive yesterday on hopes that the U.S.-China trade talks could result in an agreement. Trade talks resumed as U.S. Treasury Secretary Steven Mnuchin and Trade Representative Robert Lighthizer arrived in Beijing, ahead of high-level talks scheduled later this week. This is likely to keep the markets upbeat and we could see some buying in the EM currencies today.

[This is an authored article by Tushar Arora, Senior Economist, HDFC Bank. All views, opinions and expressions are personal and limited to the author.]