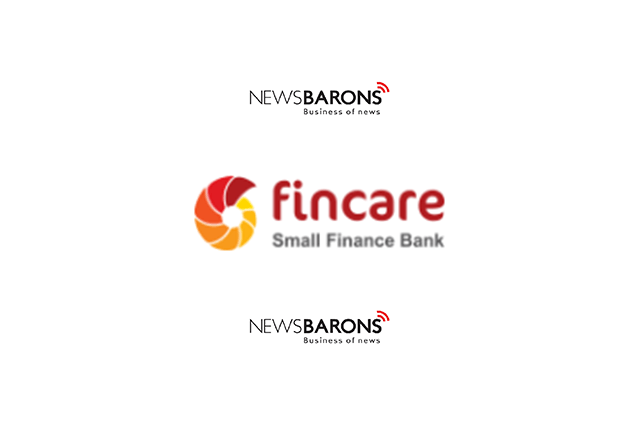 Fincare Small Finance Bank (SFB) announced its entry into Hyderabad at a press conference, today, with the launch of its branch at Banjara Hills. After its successful launches in some of the major cities such as Mumbai, Delhi and Kochi, this branch marks the Bank’s presence in 8 out of the top 10 metropolitan cities in India.

Fincare SFB has a strong affinity for the region, having originated its microfinance operations in Chittoor district of Andhra Pradesh in 2007. In addition, the bank also operates business correspondent outlets in a few districts of Telangana state. This is the bank’s first full service branch in Telangana state, offering a complete suite of products, such as savings accounts, current accounts, fixed deposits, NR products, life insurance, fund transfers through NEFT, RTGS, IMPS, NACH as well as bill payment facilities. On the assets side, the bank provides loans against gold at affordable rates. The Bank has a strong digital offering with provision of banking through the Fincare Mobile App as well as Internet Banking.

Rajeev Yadav, MD & CEO of Fincare SFB, during the press conference stated, “Hyderabad is a key services hub with Information Technology, Biotechnology and Pharmaceutical Industries in the city. Hence, this city is ideal for our unique offerings such as corporate salary accounts and digital accounts, as well as attractive savings and fixed deposit products Hyderabad also fits onto our broader strategy of having a deep presence in deposit-rich large metros.”

Fincare SFB also plans to launch new products such as 2 wheeler loans and affordable housing loans in the immediate term, in addition to expanding its footprints in cities such as Pune, NCR, and Bhopal, over the next few months. With an overall guidance on numbers in FY21, Fincare SFB is targeting Assets under Management (AUM) of Rs. 10,000 Crore by 2021, expecting to be entirely funded by deposits.

Fincare Small Finance Bank has shown robust growth year on year. As of September 30, 2018, The bank had gross Assets Under Management (AUM) of Rs. 2,899 Crore, demonstrating a 99% year-on-year (y-o-y) growth. The Bank also had a deposits base of Rs. 1,445 Crore, comprising of over 40% retail deposits.

Fincare Small Finance Bank commenced banking operations on the 21st of July, 2017, after receiving the final license from the RBI in May 2017 under Section 22 of the Banking Regulation Act 1949. Fincare SFB enables financial inclusion of the underbanked base of pyramid, mass retail and micro & small enterprise segments. It also serves the banking needs of banking-savvy consumers across metro, urban and semi-urban markets. As of December 2018, Fincare SFB serves over 14 lakh customers in eleven states and one union territory across India.